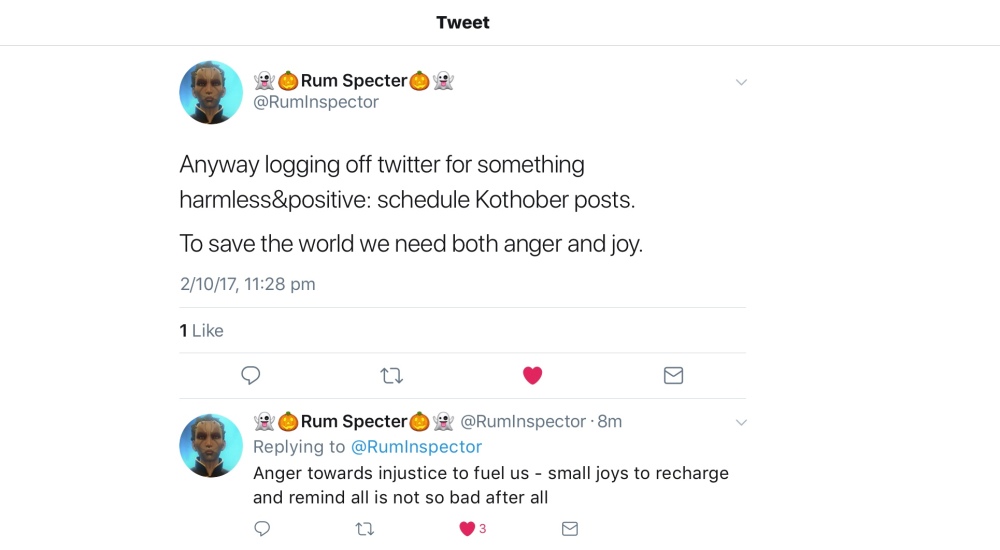 I just read a tweet from my friend @RumInspector that said “to save the world we need both anger and joy.”  She wrote this in the hours following what I have heard is the worst mass shooting in United States history, hours after a gunman indiscriminately killed 50+ people at a country music concert for reasons unknown. She’s angry. I read her tweets leading up to this, so I hope I am not putting words in her mouth, but I think it’s safe to say that she is angry because people were just assassinated in the streets and now they are dead and nothing will bring them back.

America has a huge gun problem, largely due to the tremendous financial and political influence of the extremist right wing political corporation known as the NRA.  (For a look at the NRA’s advertisement calling for the elimination of the ‘liberal threat’ by any means necessary, see here. A quick Google search will turn up lots of other examples of NRA propaganda.) Gun violence statistics speak for themselves and they are also easy to find, so I won’t bother putting them here. To say these killing sprees are epidemic is hardly controversial to those who still deal in facts in 2017.

But what I like about Rum Inspector’s tweet was that she said “anger and joy”. And she shared that she was logging off Twitter to go do something frivolous and satisfying, something to shore up her emotional resources so that she could keep her sanity and strength to stay angry at the things in this world that richly deserve our fury, so she could help change them.

I, too, have been thinking about what a depressing, infuriating and sad disaster this world is becoming. If 2016 was the year that brought us the phrase “dumpster fire” then what is 2017? The sewage treatment plant explosion? Sounds about right, and sometimes it feels like the greedy billionaires are going to go on winning. Those of us with real lives at stake, and those of us with empathy for others, can feel overwhelmed and exhausted. So that’s why we need the joy. We need to be reminded that there is beauty left to be seen, there is happiness to be experienced, there are lives to be lived and saved and celebrated.

So, in short, it’s okay to be mad as bollocks over this shit-show of racism, sexism, sexual orientation/identity hate, religious intolerance, gun murder, police brutality, alternative facts, undermining of founding principles and willfull ignorance AND it’s also okay to tweet GIFs, watch Star Wars, play video games and laugh even while this is all happening, because we need to rest and rebound in order to keep fighting for the rights of life on earth.

So, my task every day is to stay angry but to stay joyful, too. This is my life, and it might be my only one, so I will live it with as much joy as I can and as much anger as I need in order to be a force for change and leave this place better than it was when I walked in, and by better I mean for everyone. If we all do this, a more peaceful and just world will be our shared legacy.